Throughout my life I have witnessed the passing of power so many times, from one holder to another and sometimes just going past me on the streets of NYC. We are civilians, but those in power, although once single and vulnerable units like ourselves, have been empowered and separated from the group. More often than not, the Motorcade represents the passing of the power of life to the higher power that gifted it. Whether it is a ride to a state capitol by politicians or a trail of mourners to a grave, the Motorcade represents that transition. Power is the ultimate illusion, one we all embrace, for the moment. I think of Elvis, Lady Dianna, Frank Sinatra, Trump, Reagan, Bush on their way to meetings, and the myriad of executives in hostile territories shielding themselves from the populations they profit from. And of course, the ‘horses’ they rode in on, as the idiom goes. This NFT animation of Stephen Lack's work "The Motorcade"

represents the challenge and dismantling the image of power of the State and the police; the cheerful headlight show of the "Metal Parade" remind us in the most playful way that Power is the ultimate illusion. 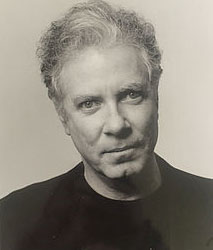 Born in Montreal, Canada, Stephen Lack moved to the East Village in the early 1980s, where he began working on and exhibiting his paintings. Over the past four decades, Lack’s works have been known for persistently disclosing the violence and anxiety behind the mythos of American society and its way of life for the middle class, and have earned him an international audience.

In the early 80s, Lack painted a series inspired by wrestling derived imagery as well as a series on confrontations with police and figures of authority. These works embodied the tension and the spirit of resistance towards the conservative policies of the Reagan administration and the motivations of a corporate autocracy. Later, his Burning Cars series, which highlighted the tension between the peaceful, idyllic scenery of Suburbia and the myths that supported that illusion, led him to be invited to lecture at the Design Department at Ford Motor Company. Lack’s works include a variety of mediums, from drawings to sculpture, and are especially known for their strong Neo-expressionist imagery. His instinctive and energetic brushstrokes and bright, upbeat colors draw a contrast with the underlying content of his paintings, and contribute to his work’s fascinating and timeless qualities.

Throughout the years, Lack has painted and exhibited his works alongside many other East Village artists, including Jean Michel Basquiat, Martin Wong, James Romberger, and more. Currently, Stephen Lack is participating in a number of solo and group shows. A book on his paintings “When Are You Coming Home?” with a forward by Carlo McCormick has just been published by Xeno-Optic Press, and will be available soon. His works are housed in over thirty major private and institutional collections and museums, including The New York Public Library, The Brooklyn Museum, The Chase Bank Collection, and the Ralph Lauren Family Collection. In 2020, he received the New York Acker Award for painting.

Lack studied Psychology at McGill University as well as courses in sculpture at Columbia University, NYC and Ecole des Beaux Arts in Montreal. He received a master’s degree in sculpture from the University of Guanajuato. Lack also starred in a number of movies before fully committing himself to his art practice.